Deprecated: The each() function is deprecated. This message will be suppressed on further calls in D:\Groups\HEX-GRP-matralab\HEX-PRJ-matralab\public_html\eoi\includes\MagicWordArray.php on line 197
 Deniza Popova - Ecstasies of Influence 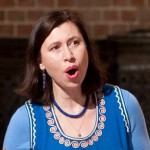 Deniza Popova was born in Bulgaria and grew up in Northern Germany. She has lived in Berlin since 1989. She studied music and singing at the University of Music "Hanns Eisler" in Berlin, then studied musicology, specializing in Bulgarian music anthropology at Humboldt University and Free University. Her defended her PhD dissertation project on the subject of Authenticity, Aediality and Identity: Ways of defining and transforming "authentic Bulgarian music." She describes in her scientific works the influence of Byzantine church music as well as their present existence on the folk music of Bulgaria. Deniza sings what she explores as part of Ensemble Extrakte and for 10 years as part of Ensemble Polýnushka. Her latest research project explores the importance of making music by examining specific influences on the musicians, in particular musician health. A music-sociological study of the structural and individual factors that influence the ability of musicians to work is underway. She devotes special attention to the basic conditions and ways of communicating.

Deniza contributes to EoI in Berlin.