Deprecated: The each() function is deprecated. This message will be suppressed on further calls in D:\Groups\HEX-GRP-matralab\HEX-PRJ-matralab\public_html\eoi\includes\MagicWordArray.php on line 197
 Farhan Sabbagh - Ecstasies of Influence 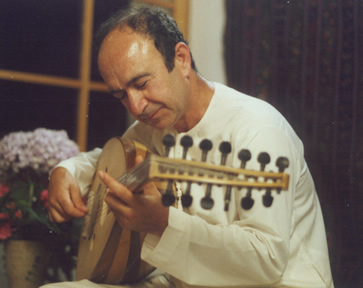 Born in Syria, Farhan Sabbagh is one of the few remaining oud virtuosos. He is also a composer and a master of Arabic percussion. He studied music and composition with his father and great-uncle, in Damascus and Cairo. In 1981 he was invited by the International Institute for Traditional Music (UNO) to present Arabic music in Europe. Since then he has lived in Berlin and participates in various projects with international musicians and ensembles. Professional musicians continue to train with him. He looks back on many concert tours worldwide and numerous international LPs and CDs. For more information, check out his website: www.farhansabbagh.de

Farhan contributes to EoI in Berlin.