Deprecated: The each() function is deprecated. This message will be suppressed on further calls in D:\Groups\HEX-GRP-matralab\HEX-PRJ-matralab\public_html\eoi\includes\MagicWordArray.php on line 197
 Ravi Srinivasan - Ecstasies of Influence 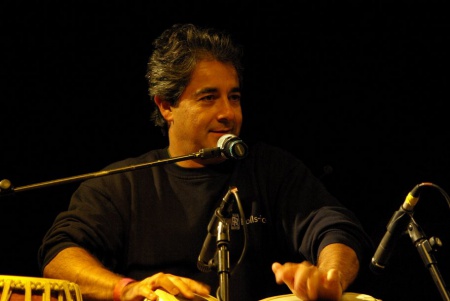 ﻿Ravi Srinivasan (Tabla, ghatam, vocals, whistling, percussion, electronics and composition) was born in 1965 in Singapore. His family encouraged his early musical talent and he studied classical violin. Later he came into contact with jazz and world-music and began learning the classical hand-drum of India, the tabla, with the legendary master-drummer Pandit Kamalesh Maitra in Berlin. Ravi's wide-ranging musical abilities and effortless virtuosity have earned him many fans and ensure that he is constantly in demand as a soloist and accompanist. As a prize-winning percussionist he has performed at festivals worldwide, from Malaysia and India via Europe and Russia to USA and Greenland. He has composed music for films, theatre and dance (traditional Kathak as well as modern and fusion) and written songs for his various bands and ensembles.

Ravi is co-founder of the world-music trio Indigo Masala, which won the Creole Worldmusic Prize in 2006, and plays with the Music Ensemble of Benares, Abrasaz, the Ioanna Srinivasan Dance Company, The Hypno Theatre, Dotschy Reinhardt Quartett, the Joachim Gies Trio and countless singers and instrumentalists of classical Indian music. Ravi is the music director at the Academy of Kathak Dance in Berlin, Germany.

Ravi contributes to EoI in Berlin.