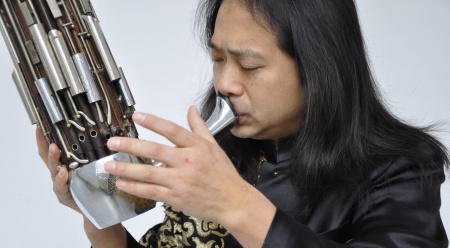 Wu Wei is an avant-garde Sheng soloist. He has helped to develop this four thousand's years old ancient instrument into an innovative force in contemporary music, through the creation of new techniques, expanding the new repertories and integrating different styles and genres.

Born 1970 in P.R.China, he studied the Sheng at the Shanghai Conservatory and was a soloist with the Shanghai Chinese Orchestra before studying at the Hanns Eisler Academy with a DAAD scholarship in Berlin, where he is now based.

In addition to many prestigious national and international competitions for traditional Chinese music, he won the Musica Vitale Competition, Germany, in 1996 and 2002 and the Global Root world music prize in 2004. In 2011 he won the Herald Angels Award by Edinburgh International Festival for Composition of Unsuk Chin „Su-Concertro for Sheng“ with the Seoul Philharmonic Orchestra under Myung-Whun Chun.

His international engagements include appearances throughout the USA, Canada, South America, Europe, Russia, and the Middle and Far East, and he has given the world premieres of more than 150 works (including ten concertos for Sheng and Orchestra), by composers including John Cage, Unsuk Chin, Toshio Hosokawa, Enjott Schneider, Joerg Widmann, Guus Janssen, Tan Dun, Chen Qigang, Guo Weijing and Ruo Huang.

He is also a prolific composer for Sheng. He already received various composition commissions, such as the foundation Royaumont in 2004, "Musica Viva" Munich in 2005, the Hanse culture foundation in 2009, the Civitella Ranieri foundation New York in 2010, and the cultural foundation Sachsen in 2003, 2005, 2006 and 2011.