Home Beautiful – Inviting in the Ancestors 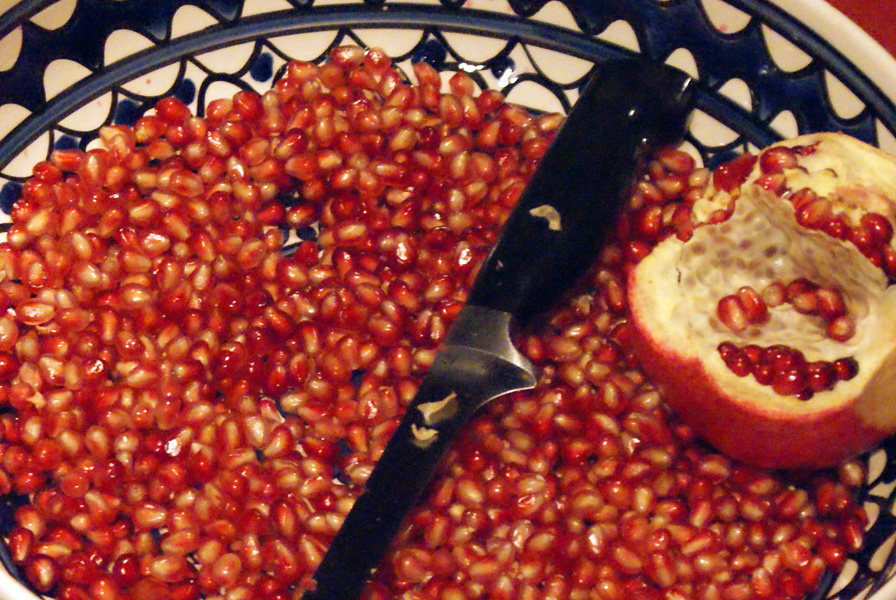 “Home Beautiful: Inviting the Ancestors” (like the other live art event in the Jewish Home Beautiful – Revisited series), was based on the Jewish Home Beautiful community pageant, written by Betty D. Greenberg and Althea O. Silverman in the 1930s and consisting of multiple holiday table settings and foods, traditional songs, and readings. Unlike the original, this critical non-scripted reenactment troubled the construction of personal and cultural narratives and questioned the ways in which such storytelling efforts shape our experience of home(land). Central to the connections between the aesthetic and political intentions behind the original Jewish Home Beautiful was the historical moment when it first appeared – the forced displacements of Jews in the Shoah (Hebrew for ‘The Holocaust’) and the simultaneous maneuverings leading up to the al Nakbah (Arabic for ‘The Catastrophe’ – referring to the May 1948 transfer of British colonial rule in Palestine to the State of Israel, which resulted in the occupation of Palestinian land and was marked by forced expulsion, ethnic cleansing and massacres in Palestinian villages). While the Jewish Diasporic experience has been mitigated, in part, due to the performativity of cultural constructions such as the Jewish Home Beautiful, the domicide – that is the politically motivated willful destruction of houses and homes that has been and continues to function as a major weapon in the arsenal of cultural oppression – impacting Palestinians continues to escalate.

For three hours on Saturday, October 22, 2011, the five of us reflected on our individual and collective experiences of loss as Jews and Palestinians and wondered out-loud about how beauty strengthens resilience. We spoke about the objects we each brought to the table for this occasion, each of which paid homage to a particular ancestor whose own experience with home and beauty we wanted to honour – family photographs, embroidered handwork, ceramics – and we sang and shared food. We were amicable towards each other as we mourned and celebrated together. We left questioning how to continue the conversation amongst us and how to get to a place where we could reveal and care for the hidden and unspoken injustices. As one Palestinian woman said after the event, as we deepen the dialogue and find more open ways to appreciate what beauty has to offer in the face of home’s destruction, it would be helpful and satisfying if we could “share a lot more emotion, heartache, disappointment and anger about the unsaid displacement, the torture, the imprisonment, the unjust taking of land and homes and farms and crops and childhoods and livelihoods” that has been, and continues to be, the experience of the vast majority of Palestinians.”

While the aim of this event was to create the conditions within which all of us present could speak and be heard, in retrospect the causal links between Israeli occupation and Palestinian homelessness were not fully expressed. As one Palestinian participant explained in an email exchange with me: “In order for us to create a mutual, rather than parallel, exploration of suffering – and by extension, of the role of beauty and the loss of home – I would need to feel that the Jew understands that the Palestinian suffering is created and caused by Jews (and others) who defend the establishment of Israel in its current form i.e. as an occupying and military power that violates the human rights of indigenous Palestinians.” This is what we will endeavor to enact in related future co-creative encounters.