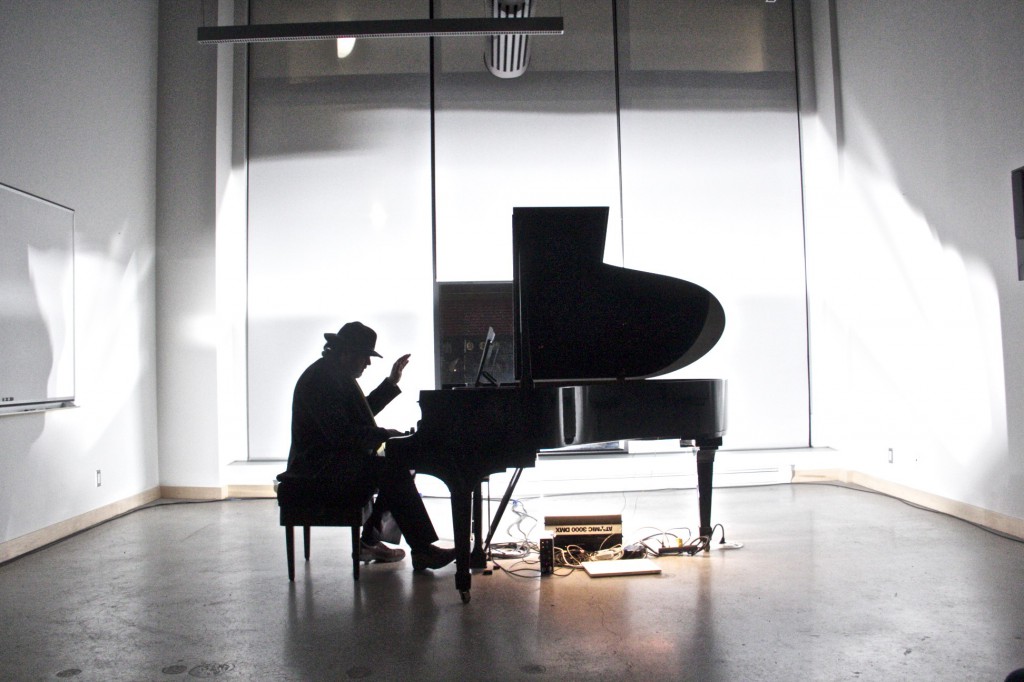 For Montreal’s Nuit Blanche 2013 (March 3, 2013), matralab collaborated with the Goethe-Institut in presenting an evening of multimedia performances and installations.

Villes LuminoSoniques – LuminoSoniCities is a multifaceted media arts installation in the new spaces of the Goethe Institute Montreal. It showcases the work and collaborations of 10 artists working at or connected to the matralab, a research lab directed by German composer Sandeep Bhagwati at Concordia University. All artists explore the relationship of sound, light and cityscape in different ways: looking at a window that suddenly looks back at you; navigating the ambient sounds of Montreal on Google Map; showing a film of an encounter between you and someone you have never met, in a city that you perhaps have never visited; vintage domestic lamps going crazy in an uncanny conspiration of sound and light; exploring a cityscape, listening to music that is composed live by your movements; chilling to quiet gentle piano sounds in a quiet room that suddenly becomes very uncomfortable and exposed; and an architectural light-music-installation-performance that sways to the car traffic outside the building; a building that is now gentrified, but before was home to many artists – a fact explored and underlined by another performance/installation.

All installations featured performances that happened throughout the evening. All performances were repeated several times.

A piano stands in a silent room. Occasionally, street noises filter in and make the piano sing quietly to their chaotic tune. But this singing always is only an after-image, an echo of a violent act of intrusion. In a nightly city landscape, lights are usually unobtrusive and beautiful, even when they flicker – but city sounds will assault us and never let us go. In this installation, the situation is reversed – the light assaults us, while the piano sound is gentle, inviting us to listen and contemplate.

Music for 12 Domestic Lamps is an installation and performance work for 12 sound and light emitting lamps. Each lamp is discreetly outfitted with a surface transducer speaker, turning the lamps into both light and sound emitters. The work investigates the potential of domestic objects, both to recall their quotidian functions and – through aesthetic transformation – transcend them.

The lamps will be performed upon by an electroacoustic improv-trio (A. Basanta, J. Stein, M. Stein), and will also run autonomously as a composed sound and light installation. The lamps will be arranged at the Goethe-Institut window-front, allowing both visitors and passers-by to experience the work.

inside/outside is an interactive audiovisual performance and installation that blurs the perceptual boundaries of sound and moving image inside and outside of a given space. Live and recorded video will combine with an immersive multi-channel soundscape for processed horn and field recordings. This combination will echo the colors of street lights, and trace the movement of traffic outside the space, and mix it with the activity taking place inside.

[IR]rationnel is a performative installation where invisible light intersects with sound. Moving bodies in the real world interact with objects in the virtual, physically modelled world. Disturbances in the virtual world make some things move, bounce, collide. Movements of virtual bodies within the [ir]rationnel world produce sound audible in the real world. The sounds inspire movement, movement causes sound. Users interact with virtual satellite-like objects that provide their reinterpretation of electric city lights.

An interactive work dealing with the veiling and unveiling of perception… seductive and mysterious because of what is left unseen, eyes appear from a darkened room, seeking a connection with those on the other side. But who is the seen and who or what the seen?

Someone’s behind those Venetian blinds. A finger slips over an edge and pulls it down. Two fingers, four. A pair of eyes. Then a pair of lips mouthing your name. Who is it? And how does he or she know you, standing at the window, if she’s only a ghost of a ghost? Come to the Goethe Institute / La Nuit blanche, when Alkemie animates the windows with video-performers haunting video-persiennes.

The Montréal Sound Map is an interactive soundscape project that allows users to upload field recordings to a Google Map of Montréal. Since 2008, almost 300 sound recordings from all over the island have been collected and archived.

In this installation, the Montréal Sound Map is projected on a window of the Goethe-Institut. The map runs on autoplay with field recordings selected at random one after another, and the map pans to new locations following each newly selected sound. The audio will be heard both outside and inside, providing viewers with two very different listening environments: one static and one dynamic.

Anyone is welcome to contribute to the project. For more information, please visit http://montrealsoundmap.com.

Phantomaton is a user-dependent, responsive, 3-channel-video installation that generates composite video shots of its spectators placing them in urban landscapes. Embodying the intimate space of a photo-booth, this participatory cinema piece addresses the tension between authorship and spectatorship in regards to aesthetic creation around the moving image. It works as a cinematic device that requires the audience’s participation in order to function.