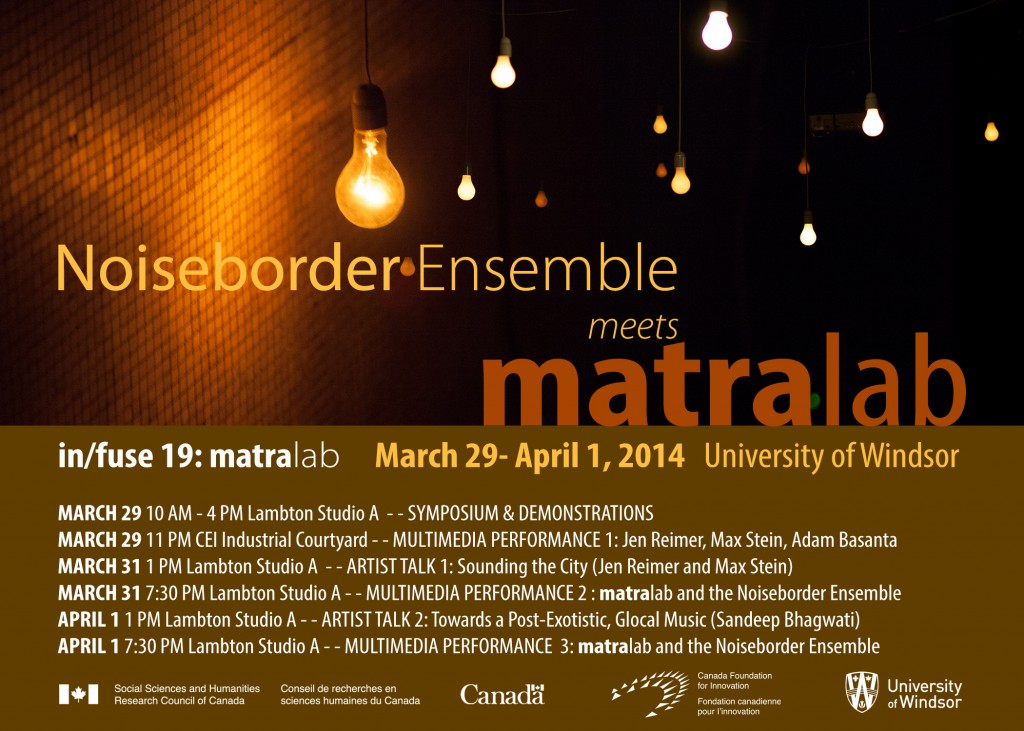 Brent Lee, a founding member of the Noiseborder Ensemble, wrote a synopsis of the three nights of performances in Early April 2014:

The Noiseborder Ensemble hosted a group of artists associated with the  matralab project at Concordia University in Montreal led by Sandeep Bhagwati. There were several events over five days, beginning with a performance by Jen Reimer, Max Stein, and Adam Basanta. Jen and Max perform together frequently, often creating drone-based works in unusual acoustic settings such as tunnels or abandoned buildings. They were set up with an 8-channel audio system in a large room under construction in the Engineering building at the University of Windsor; Adam Basanta mapped the audio output into a system for controlling a series of light bulbs hung throughout the space.

The second performance of the Noiseborder Ensemble/matralab event took place on March 31, and featured a performance entitled Early Robotics by Max Stein, Julian Stein, and Adam Basanta. They have created a large array of mechanical sound devices controlled through a complex Max/Arduino setup.

Noiseborder also presented a new piece entitled Outer Drive that Brent Lee wrote for pianist Megumi Masaki with video by Chris McNamara. The video features urban images from Windsor and Detroit; in the full version the scene changes in the video are triggered by changes of bass note in the piano harmony.

Noiseborder also presented the first performance of supernatant, an interactive video work co-created by Nic de Cosson, Martin Schiller, Anthony Giglio and me. In supernatant, the position and movement of a frog in the video is mapped to a graphics generation algorithm and to the spatialization of audio. Martin played the Therevox synthesizer, Nic monitored the video projection and processing, and Anthony managed the audio processing and spatialization.

matralab also presented Native Alien, a multi-channel interactive piece for an improvising soloist in an immersive interactive environment created by Sandeep Bhagwati and Navid Navab. Felix del Tredici was amazing on trombone, and the sound generated by the Native Alien system in response to Felix’s playing was rich and complex. Before the concert, Navid also set up an engaging array of interactive audio stations where audience members could create sound by manipulating toys and other small objects.

Sigi Torinus’s piece Prana was also performed, where a variety of breathy sounds from Felix’s trombone and Trevor Pittman’s clarinet triggered video clips of wisps and puffs of smoke against a black background. Brent Lee added some audio processing to the trombone and clarinet.