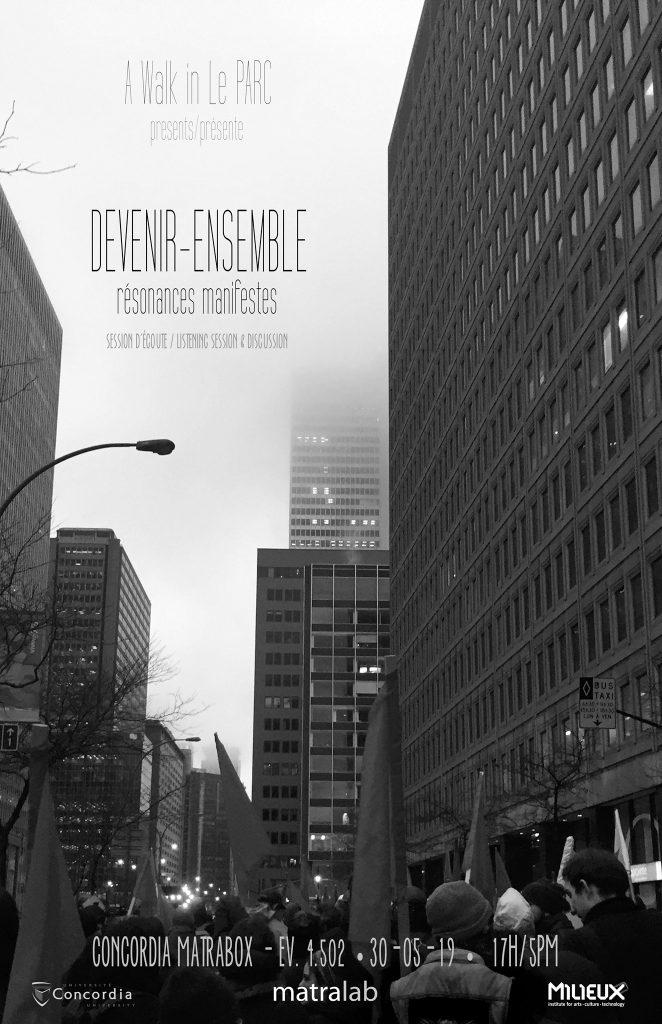 “Résonances manifestes” is a comprovised music piece based on a sonic score composed of field recordings from various demonstrations that shook the streets of Montreal in the past years. The project is the musical expression of a process of research-creation – at the confluence of music, philosophy and political thought – aiming to understand how sound and music contribute to the (trans)formation of affective communities, these intensive communities that don’t rely on preestablished identities or specific interests, but which occur like something that circulates between beings, things, ambiances. These researches led among others to the realization of an inquiry on the sounds of politics, and more peculiarly those coming from the recent autonomous demonstrations. The piece is in that sense a musical study seeking to question how some musical processes could orient the experimentation of new ways to gather in the event.

The listening session will be the first occasion to hear “Résonances manifestes” after it has been premiered by the Devenir-ensemble – an assemblage of ten musicians
of Montreal – last February at Sala Rossa, part of the Suoni per il popolo concert series. The musicians improvised from the sound score not to represent the ambiance of these demonstrations to the public, but rather to make feel this subtle mix of passion and uncertainty that characterizes the affective intensity of these singular moments. The listening session will be followed by a presentation by Hubert Gendron-Blais, initiator of the project, and a discussion on some issues opened by the piece: comprovisation, musical ecology, the relation between music and politics, art and social movements, and the contribution of sound and music to the experimental modes of knowledge.

An event co-presented by the matralab
http://matralab.hexagram.ca/events/resonances-manifestes-listening-session-discussion/

Hubert Gendron-Blais is a musician, author and researcher working at the confluence of philosophy, music and politics, with a particular attention to the concepts of affect and community. Apart from his literary publications (poetry, short stories), his work have been published in ephemera, Inflexions, and Cahiers Equinox, among others, and in the book “Révolutions et contre(-)pouvoir” (ed. B. Coutu). Member of the Senselab and the matralab, he is completing a Ph.D. in Humanities at Concordia: the project of the Devenir-ensemble is the musical dimension of this process of research-creation. In music, he’s taken in a creative process with the experimental rock band – Ce qui nous traverse– (Cuchabata Records), while pursuing its own sound experimentations in “solo” (https://soundcloud.com/hubertgendron-blais).