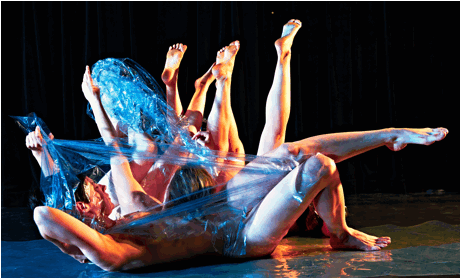 One hears a sound. One listens to murmurs and chants. But can one feel those sounds? Perceive them differently?

The human skin is sensitive to touch, but for it perceives intensities and warmth, it can also be aroused by the vibrations of sound and light. Notes and sparks mark their stories on the body. The skin is a land to write on and the flesh is a river to enter.

Flesh waves is an augmented reality performance/installation exploring the relationships arising from the interaction between the body in movement and technologies of sound spatialization in real-time and lighting. Artists of this piece integrate technologies in their artistic research as a means to reach unpredictable sensory experiences, unknown territories:

Under a faint glow appears a three-dimensional human sculpture: five women, bodies intertwined, form a Collective Body. Transported by the chant of their own murmurs, they slowly carry one another into a continuous wave. Bodies and breaths entangle, the women are simultaneously five bodies and one same mass, five voices and one choir.

The complete soundscape of this piece is generated live by the performers themselves and thus spatialized simultaneously by the sound opreators. From the different dynamics of movement emerges an organic electroacoustic soundscape. Lively traveling in space, the soundscape grazes the performer’s skin and resonates in their movements. Acting as the sixth performer of the piece, the sound also surrounds the spectators, integrating them in the live sound form. The audience is immersed in the flesh, confronted to the extremely intimate.

Internationally acclaimed new media artist Isabelle Choinière is known for finding it in her work to fill the gap between technological progress and spirituality, highlighting humanity (critic Rossitza Daskalova in Vie des arts). This time, she collaborates with international artists, composer Ricardo Dal Farra and lighting and set designer Audrey-Anne Bouchard, to create a piece where the ritual meets the virtual, where technology deploys the feminine flesh in all its sensuality.

Isabelle Choinière is an international artist, researcher, author and lecturer of the new contemporary performative scene involving technology since 1994. She is a Ph.D. candidate (VIVA in March 2014) in Arts and Humanities at the Center for Advanced Inquiry in the Integrative Arts (CAiiA) affiliated with the University of Plymouth in the United Kingdom. Choinière has been pursuing her Ph.D. under the supervision of Roy Ascott, founder and director of the Planetary Collegium.

She has been giving seminars and lectures as a visiting professor and lecturer in Canada, Europe, Latin America and the United States. As a research artist, she collaborated in Canada and France with major research centres, among others: the Hexagram Center for Research-Creation in Media Arts and Technology in Canada, and in France at Centre Culturel Canadien à Paris, in collaboration with the Laboratoire du Langage Électronique Cergy-Pontoise.

Her international research evaluate the relationship of moving bodies to technology by defining a new paradigm of interfaced intercorporeality (intercorporéité). It deals with the development of emerging cognitive, aesthetic and expressive-communicative paradigm in the performing arts. Addressed through practices of the body (somatics), her research reintroduces the body and its specific intelligence into an understanding and construction of these proposed relationships. She works on how an ontological transition of the body – through its contact with technology – lead to two emerging concepts : that of the ‘carnal collective body’ and of the ‘sound body’. Her main research-creation strategy is the development of a specific relationship between the body and technology where technology becomes the activator of a process of sensory-perceptual reconfiguration. Her methodology involves a process of collaborative research that implies empathy.

Her last research-creation project : Phase #4/Flesh Waves has been presented for the official opening of Cynetart13_Areale as well as in the E.U. Research Project METABODY in November 2013 in Dresden, Germany. Since 1995, she has regularly presented her research-creations and lectures in international festivals in Europe, Latine America and North America. Her works are studied by numerous research groups and universities throughout the world.

Her latest articles have been published by Cambridge Scholars Publishing, UK (2009) and Intellects Journals, also in the UK (2006, 2013). In 2014, she will be published by the Cambridge Scholar Publishers (chapter 4) in the book The Point Of Being, under the direction of Derrick de Kerckhove.

Dr. Ricardo Dal Farra is Associate Professor of the Music Department and Associate Director of Hexagram, the Centre for Research-Creation in Media Arts, at Concordia University, Canada. Dal Farra has been researcher and consultant on media arts history for UNESCO, France; director of the Multimedia Communication national program at the Federal Ministry of Education, Argentina; and senior consultant of Amauta – Andean Media Arts Centre in Cusco, Peru. Funded by The Daniel Langlois Foundation for Art, Science and Technology he created the largest collection available of Latin American Electroacoustic Music.

As an electroacoustic composer and new media artist his work has been presented in more than 40 countries and recordings of his music are published in 20 international editions (including Computer Music Journal and Leonardo Music Journal, both by MIT Press).

Audrey-Anne Bouchard holds an International Master in Performing Arts studies.  After completing a Bachelor of Fine Arts in Design for the Theatre at Concordia University, she worked in Montreal as a lighting designer and director in both worlds of dance and theatre. In 2007, she was apprentice of lighting designer Étienne Boucher whom she followed on various productions including Robert Lepage’s Lipsynch.  In 2009, she was attributed a scholarship by the European commission to pursue her artistic research in the context of a new international and transversal theoretical and practical masters program. She joined the Erasmus Mundus Masters Program in Performing Arts studies in the context of which she studied at Université de Nice Sophia-Antipolis, France and Université Libre de Bruxelles, Belgium. For two years,  Bouchard developed a research on the interaction among the performer “body of flesh” and the projected body “body of light”.  In her thesis, she specifically observed how actual artists find, in visual technologies, a tool to transform the performer’s aesthetical experience and his or her corporeal image.  Working closely with Quebec artists Isabelle Choinière and Stéphane Gladyszewski and Belgian collective Mutin, she investigated each practitioner’s creative process and the singularity of their dialogue with visual technologies. Notions of perceptual anticipation, perception’s imagination and her own idea of a virtual presence are at the centre of her research. Up to today, Bouchard  is actually working in Europe and Canada as a lighting designer and creator of transdiciplinary performances. She has recently published scientific articles in the International Performing Arts magazine El Sotano, created by South Americans (Ecuador – Brazil – Mexico) and Europeans (France – Belgium and Spain) artists and academics. El Sotano is published in Spain.